Donal Skehan was touted a couple of years ago as ‘Ireland’s Jamie Oliver’…and he has indeed made a fantastic name for himself, and a very lucrative career as a multi-lingual TV presenter (fluent in Swedish of all languages thanks to his fiancé) and author of a number of best selling recipe books. But he’s not quite the brash, bolchie Jamie the British know and love.

That said, I do like many of his recipes and regularly flick through the few of his books I have. Being the season that’s in it, cold and dark – though with a stretch in the evenings! – I  decided to make some soup and brown bread for work lunches. And on cue Donal posted his Boot Camp Soup recipe the other day.

As usual I made a couple of tweaks. Instead of 2 green peppers, I used one each, green, yellow and red. And I omitted that devil’s spawn of vegetables…celery <makes the sign of the cross and says three hail Mary’s>…yuck!

What intrigued me was one ingredient in particular…a whole head of iceberg lettuce.

…I am pleased to say it turned out surprisingly delicious. Really really tasty.

Have a go…it’s ridiculously simple.

Ingredients for a week or more of lunch portions. 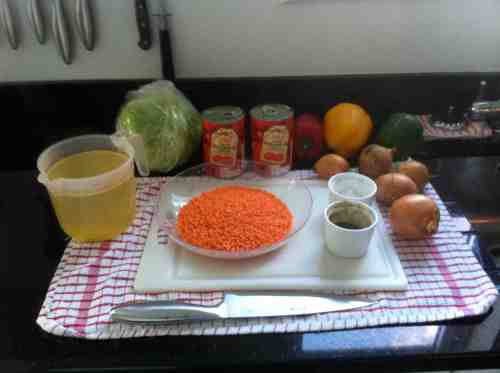 Chop all ingredients into rough chunks, into a large pan or stock pot, bring to the boil, reduce to a simmer and cook for 40-45 minutes, stir regularly…lentils may stick to the bottom of the pan.

Blend with a hand blender, add more water if needed. Leave to cool completely and store in the fridge, or freeze.