Alan gave me this book of Indian recipes by Gordon Ramsay, “Gordon Ramsay’s Great Escape”, some time ago for either Christmas or a birthday. I’ve tried a few of them, and decided to give this one a go as I hadn’t tried it before. Badami means almond apparently, in which of India’s 22 official languages I’m not sure. It has a lot of ingredients but it’s really not difficult as most of them are flavours or spices and mostly go in all together.

This recipe serves 4, though I only made it with two chicken breasts. 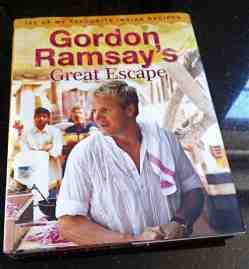 Toast the slivered almonds over a medium heat in a dry pan. This takes only a couple of minutes. Keep an eye, they’ll burn faster than you might think. Tip onto a plate or ramekin and leave to cool.

Add all remaining spices and ground almonds. Stir in briefly.

Increase the heat slightly and add the chicken and stir, covering with the spice mix, until the chicken starts to whiten.

Reduce the heat to low, add in the yoghurt, stir until well mixed, cover and cook on a low simmer for 20-30 minutes, stirring occasionally. It’s a mild flavoursome dish. It was really nice, though I used too much lemon and it really sang. Remove the cinnamon stick and cardamon pods before serving.

I served with basmati rice, sprinkling the toasted almonds over the sauce.